I have been on top of this outcrop of rock that looks like it belongs in Arizona;  it is called La Peña de Lara.  It was on a beautiful 20 degree day in late February 2009. It is located about 30 kilometres south of the ancient city of Burgos, which is itself about a three hour fast drive north of Madrid.  It is in this area that I feel most at home in Spain.  In combination with some other factors, this piece of rock is what ‘hooked’ me to Spain and to this part of Spain in particular.

Estoy enganchado de España.  I say this many times a day when I am there.  I am hooked on Spain.  That late winter day a few years, I had travelled across the country, my goal being to see two small 7th century Visigothic churches, both situated out in the middle of nowhere, probably one of the reasons how they somehow survived down through 14 centuries.  I arrived at the church of Quintanilla de Las Viñas around three, took a pile of photos, and sat down to chat with the full-time guide, Antonio.  This  church is a gem, what remains of it, with a variety of and quality of sculpture that reveals that the Spanish instinct for the visual has very deep roots.  I might write a post some day on it, but then you would have to endure Ed in “his passion for all things Visigothic hat“.  But at least that day you could choose not to read my post.  I would warn you. Here is a photo of the tiny church with the Peña framing it (its nave collapsed many centuries ago – if you look closely to the left of the church you can spot remnants in rock the nave’s foundation). 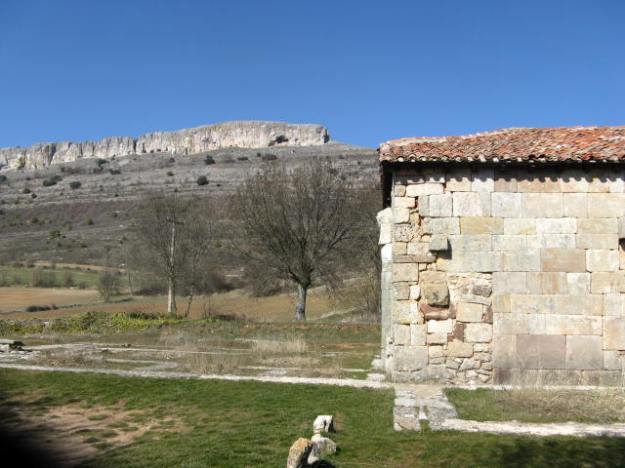 It was a quiet season inevitably and Antonio was using the time to teach himself how to play the guitar. He was warming up with Greensleaves, can you believe it? My Spanish was still very tentative.  Some of his friends arrived, a young couple, Patricia and Luís.  I stayed around.  At 5 o’clock the church was locked and they invited me to climb the Peña with them.  What the heck!  I headed up the trail. 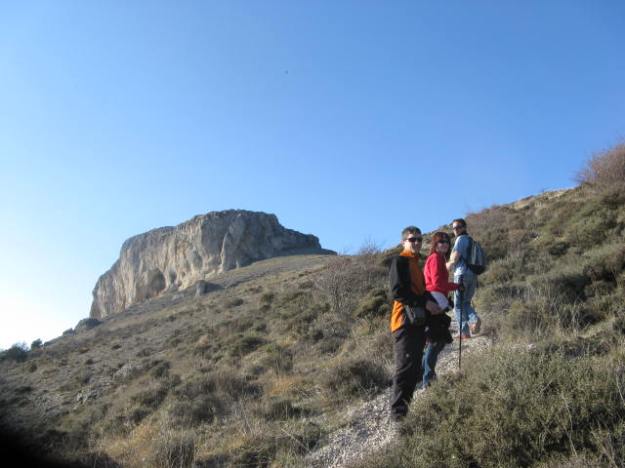 They knew the route well and it took us a little over an hour.  Here are the three caballeros from up top.  The view was magnificent, hills, cultivated fields, even snow-capped mountains.  In the distance behind is the site where EL Bueno, El Malo y El Feio (The Good, The Bad, and The Ugly) was filmed.  The landscape easily becomes the American southwest.

Here is another view;  in the middle foreground on the right are the ruins of an 11th century castle, the first one established south of the northern mountains to initiate what the Spanish call the Reconquista, the taking back of the peninsula from the Moors (completed in 1492). In the foreground is one of many small villages and further away the ever-present snow-capped mountains.  I travel here for the most part in the spring and I see snow-capped mountains virtually every day. 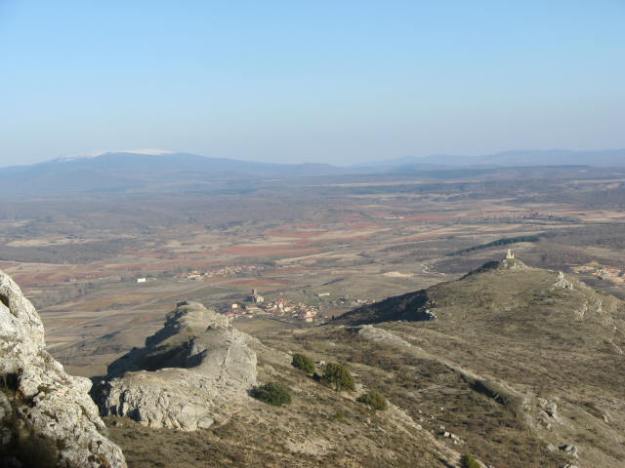 And finally the tiny church from up top, from the edge of a ledge where the four of us sat for awhile chatting.  My professor of Art History at York University has been to this church;  I was very happy to share this photo with him to add to his collection of 300,000 photos, the others skillfully taken by him. I get a kick out of sharing my discoveries with him.  He helped imbue me with this passion for the medieval.  Thanks Malcolm! 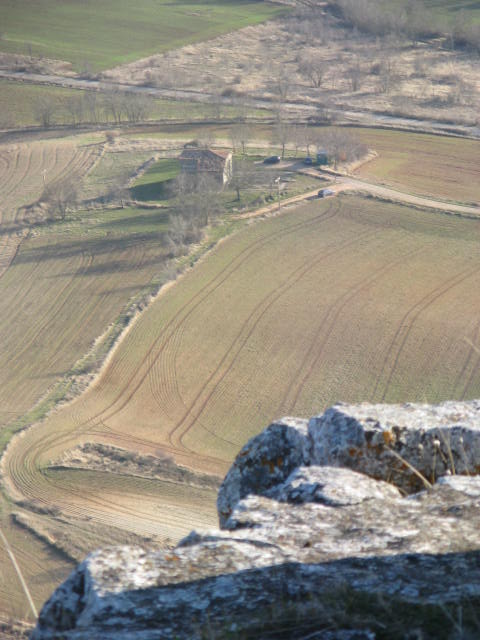 The hike up, the ongoing conversation, the budding friendships, the hike down.  And, suddenly, it was after 7 and I had nowhere to stay.  Antonio and I exchanged email addresses. I took the photo that I am now using on every post. I headed back 25 km for so to an ancient town, Covarrubias, that I knew from the guide books and had seen en route.  I got myself a room in the local hotel for two nights.  And, every time now that I return to Spain, I return to Covarrubias to the same family-run hotel and restaurant where the host had made me feel very welcome.  I have taken my brother and his wife there and I have come to feel at home in this village and in the surrounding countryside.   And, I always spend time at the little church with Antonio, helping him learn English, hiking with him in the area and enjoying playing the guide to those who show up for the first time to see the Visigothic ermita. Antonio and I stay in touch a couple of times each month.  He emailed today that he has bought himself a motorcycle.

Another post and I might talk about Covarrubias, but this accidental hook explains as much as all the other factors how I have come to love Spain so much, its people, its geography, its history, and particularly its art and architecture.  Adios.  Hasta luego!  Estoy enganchado de España!