I wanted to title this post, Podía vivir aquí!, I could live here!

I have been saying this to myself all day long for the last four days.  It is like any relationships.  First date; mm, had fun but not sure it is going anywhere.  Okay, let’s go out again.  Little bit more intrigued, more drawn in.  Let’s try a third time; after all, I am going to be in your area for a while, waiting for my plane home.  Yeh, the interest is growing.  Fourth time, hey we went to a futbol game together; it was magical;  this could be become serious. And the fifth date, the sparks start to fly.  I’m in love.  And to think that I arrived here a few days ago, tired of travelling, wondering why I booked for three weeks, and quite seriously, ready to come home.  And now I am babbling to myself as I turn every corner, as I wander down the next street, as I bumped into new marvels, I could live here, podía vivir aquí.

This post was going to be a winnowing down of photos to try to give you a sense of this city, a monumental city without any history of empire, of conquering other people (yes, they ruled Italy for a few centuries a long time ago, but every other country ruled Italy at least for a while),  a city for the citizens, an absolute delight in every corner that I have seen.

Hey, Rob Ford.  They have a great subway system, lines crisscrossing in every direction.  Good. But do you know what else they have?  LRTs, 40-50 kilometres of them, 6 lines, stretching out into the suburbs where the population isn’t as dense.  I headed out on one yesterday, a great way to see the real city, far from the tourist shops and attractions.  Today I went in the other direction and after four stops I had to jump off.  This is a city with vision, not just to attract tourists and business (like the Olympics), but vision for their citizens.  Where I had jumped off has been a flea market of some sort or others since the 14th century.  A few years ago, the city decided to rebuild it. I could believe how playfully delightful it was.  I only hope my photos can capture some of it.  It is called in Catalan, Bon Encants.  The root, encantador, means charming. 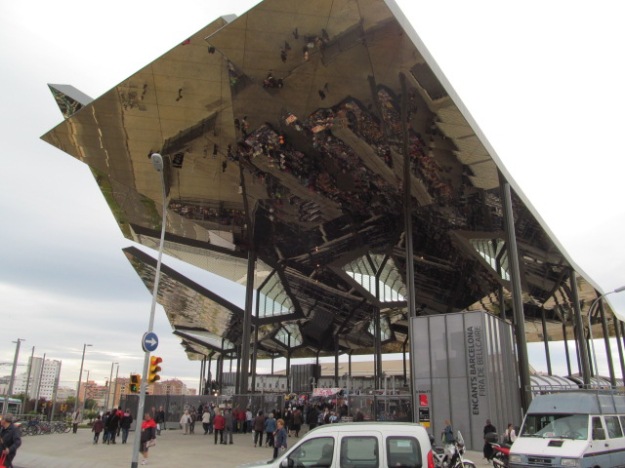 I am heading into the flea market;  what you are looking at is a totally imaginative roof of mirrors,set high above the stalls, with mirror faces set at angles to each other.  I cannot imagine how brilliant it must be be in full sunshine.

I want to drive you mad with desire to jump on a plane.  This is a photo of the main floor of the stalls, but with my camera aimed at the ceiling.  You can see where the mirrors are angled.

This will help you get with your bearings.  Stalls of all kinds, clothing, hardware, antiques, plumbing (some stalls are permanent), books, knickknacks, whatever, including pieces of leather.

I couldn’t resist this photo, reflected from on high!  But with my zoom;  without it, you would not have been able to tell that it is me. 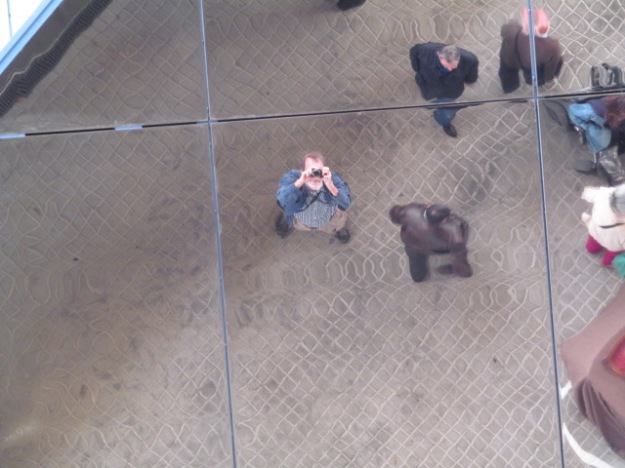 Of course, this is Spain;  around the periphery are bars and places to grab a snack, some tapas, a glass of tinto, whatever.

Another one to disrorient you;  it is taken at the edge.  You see at the bottom of the photo the  roofs of some of the permanent shops.  The mirrors are reflecting the greenery and the traffic (red car) down below on the eastern side of the complex.  And in Spain, hills in the background.

Neighbours of the flea market;  the tower is a very modern icon of Barcelona.  Its facade or skin clearly gives the impression that it has been painted like a canvas, with dabs of red and other colours here and there.  The building in front is separate;  likewise the black and white one.  The Spanish and their wonderful sense of the visual. 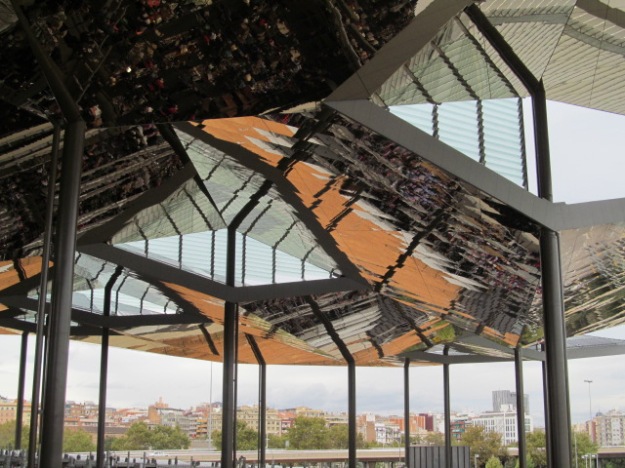 I couldn’t resist one final photo of this extraordinary flea market, extraordinary in its architecture but also in the vision of the city to build infrastructure like this.  The vast majority of tourists will never see this. I have not seen it on any list of must things to do in Barcelona.  This is for the people of Barcelona and their leaders continue to accept the responsibility to enhance their lives, to create beautiful places in which to live, work and raise their families.

40-50 kilometres of this and so often along avenues like this.

I could live here!  And you could all come and visit me!

A couple of years ago, when my big brother and sister-in-law were visiting me in Spain, we drove down the road from where we were staying to one of the many smaller cities in Spain which have no profile in the outside world.  Madrid, Barcelona, Seville, Valenica, and then you start scouring your memory for other possible places.  The small city in question was Aranda del Duero, right dab in the middle of wine country.  We loved it, came away with very pleasant memories, particularly of the friendly people and the pastry shops, and I couldn’t get over how clearly the Arandinos speak Spanish.  I understood everything.

Today I am going to do what I planned to do back then;  devote a post to one of these many smaller cities that I have enjoyed.  In this case, it is Girona, 100 km north of Barcelona in the heart of Catalonia.  I have visited it four times;  I have just spent four days and decided savouring its atmosphere.  I did publish a post about the very enjoyable festival parade I happened upon most fortunately, a highlight of my holiday.

It is an ancient city, an important Roman post but most likely built upon an earlier Celtiberico settlement.  Many here will have centuries-old roots;  they know who they are, they are not recent arrivals trying to find themselves, trying to carve out a life and identity.  Some of the medieval walls and at the bottom of the photo, you can see some of the rock that the city is built upon. 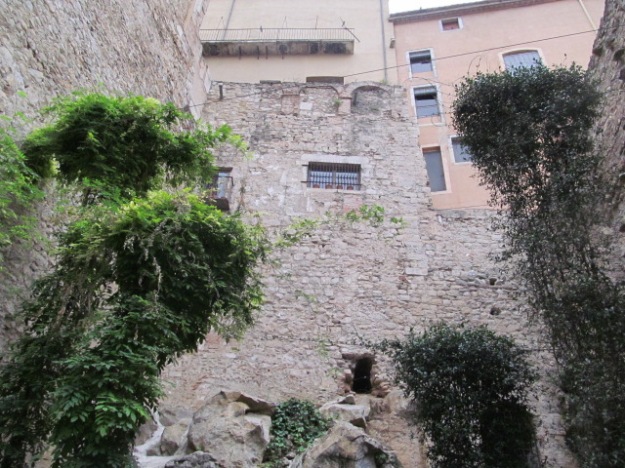 Narrow streets, filled with people, lined with shops and cafes, a labyrinth of delight to wander through and allow yourself to get lost. 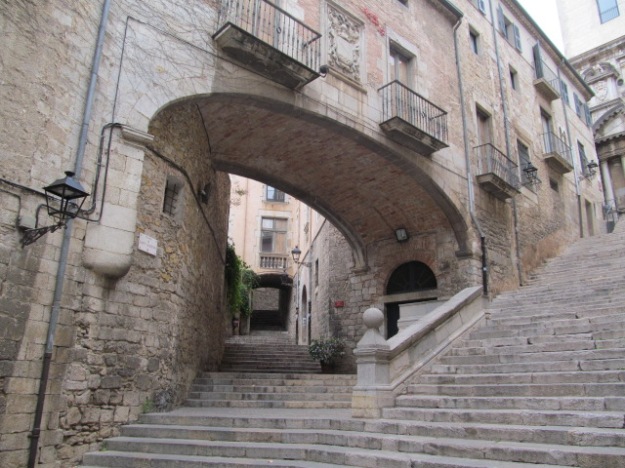 It is interesting to speculate on all those who have climbed this narrow passage through the centuries, who they were, where they were heading to on such-and-such a day, etc.

A charming little corner, a chocolate shop, an ideal spot to savour Girona and the speciality of the house. 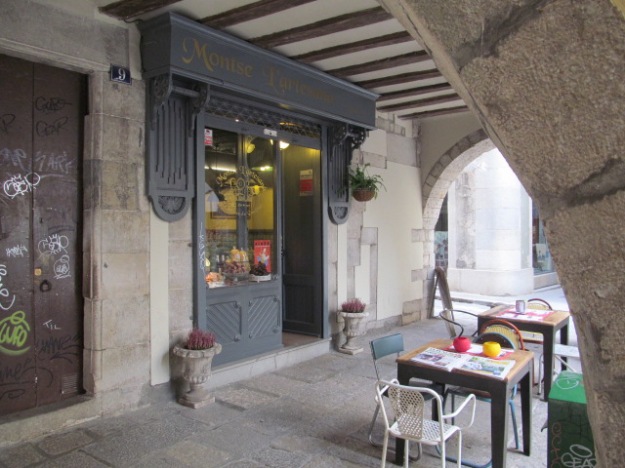 A bit of whimsey;  I ate lunch at this Creperie de Bretonne in the heart of old Girona.  In the fifties a woman arrived from La Bretagne and started creperies in a number of cities here, each of which has its iconic old bus within the walls;  iconic but also where the desserts are put together.  I enjoyed a great salad and what I thought was a mushroom and cheese crepe;  it was but it came with rashers of bacon on top.  Did they know I was Canadian?  I ate outside, of course. 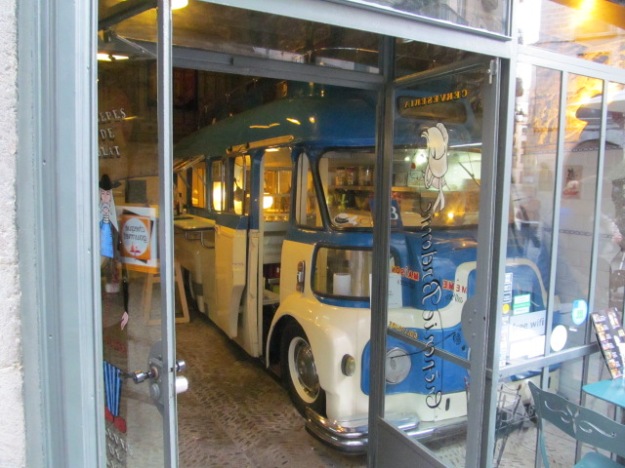 Emblematic of Girona are their colourful houses along the river.  I do have better photos of this back home.

There is also a more modern Girona.  I like getting beyond the tourist quarter and wandering in the neighbourhoods where real people live, the residents who get up every morning (eventually) and go to work.  I came across a beautiful park about a kilometre from downtown, complete with a small lake.  The apartments overlooking the lake are typical of contemporary urban architecture across this country, of a reasonable height and visually interesting.

To the left, overlooking the lake, is the coffee shop. Sorry, Alternative Grounds, you cannot compete with the location;  your clientele, though, is much more interesting. 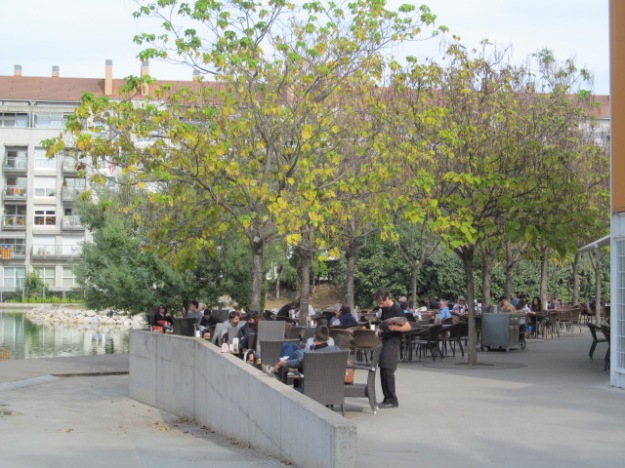 Could you handle this every morning?  But the Spanish don’t stay in their coffee shops.  They drink, chat a bit and carry on. I am sure though that some of these cafes have their morning regulars, their Pats, Rajés and Philips, among others.  Will any have such interesting baristas as we do?

I will sign off with a curiosity for you and what was a delightful discovery for me. There is some stunning Romanesque architecture here, from the 11th and 12th centuries.  In the arches of the main door of one of these churches, now a museum of archaeology (I’ll use that word again, “amazing” – I have visited it twice and they are improving it each time), there is a great variety of motives, of symbols, most of which are easily identifiable as Christian.  But the ancient pagan symbols intrude, the Celtic symbols that we associate with Ireland are present. 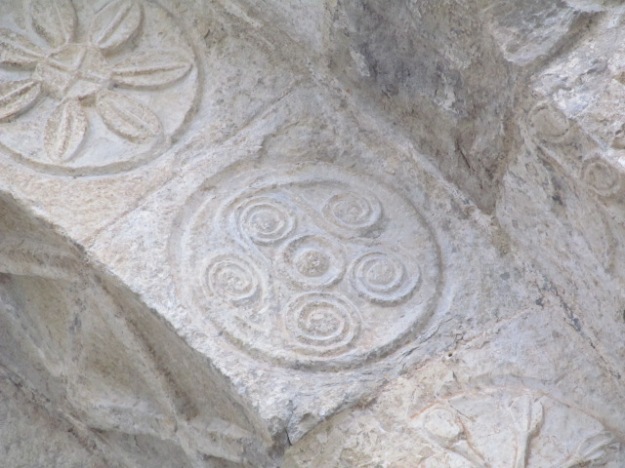 Like the spirals of New Grange in Ireland.  And here is another Celtic motif, the solar symbol of the cycle of life, the bottom right.

I have seen this solar symbol on a large altar frontal stone in a tiny 10th century church up in the foothills of the Pyrenees, Santa María de Liébana). Each age appropriates and adapts what has been handed down.  And Christianity has been particularly adept at adopting and adapting a wide range of so-called pagan symbols and practices.  I have to do some searching to understand better the larger symbol above the two smaller ones.  I have seen variations of it and the old head is forgetting what it could mean.

My final post in a few days will be from Barcelona where I am spending five days savouring it and repeating to myself what will be the title of that post – I could live here!  Enjoy and keep those comments coming!