The weather forecast was promising sunshine.  It didn’t show up where I was going. Up the funicular, a 2000 m journey through the mountain, rising 400 metres to the village of Bulnes which through the centuries has had no road connection whatsoever to the rest of Spain.  The funicular was built instead about 15 years ago – I am in the funicular facing into the tunnel.  A 7 minute journey.

A tiny village at the top, still surviving as it has for centuries by the raising of livestock, cattle and goats.  There is also now some tourism, hikers and serious hikers at that.  There are no trails for the ‘let’s go for a bit of a ramble’ hikers.  These are all classed as difficult.  There are a lot of serious hikers in this country. 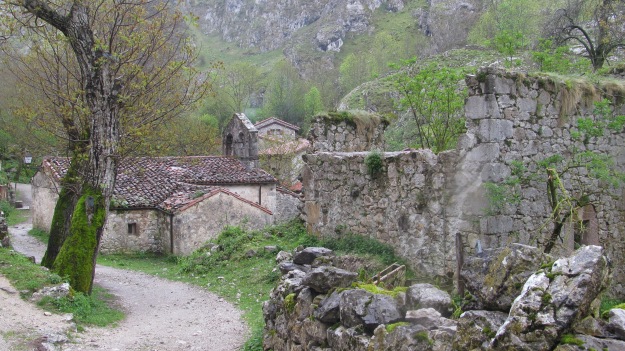 I did some walking up from the village to a lookout, onto the cloud-enshrouded peaks with some interesting information boards on the glacial history of the valley. Apparently there was a recent ice-age here in the 15th and 16th centuries.  I headed to one of the small cafes – and the local queso de cabrales, their famous blue cheese, fermented in limestone caves, a basket of bread, a glass of beer and a long chat with the owner of the cafe, a woman born here, of parents, grandparents etc. also born here.

The village is surrounded by peaks.  Notice the home on top of the hill in the foreground.  I headed back to the funicular, missed it by a few minutes and instead of waiting (every half hour), I decided to give a go at the trail heading back to the valley floor and my car, the trail that had been the only access to the village through the centuries until the funicular and is still used by serious hikers.  A 400 metre drop in approximately 2 km, with an almost continual descent, reminiscent of the first and final section of my Monday trek.  Photos will suffice. 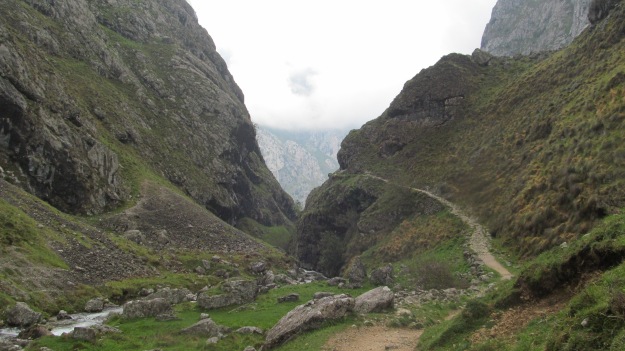 Wobblier and wobblier by the time I reached my car.  I doubt that I would have made it up, given the continual nature of the slope, with barely any flat, get-your-breath sections.  The hot bath felt so good!  Back to Madrid tomorrow and the world of flat surfaces!  Quite the memories, though, of Los Picos de Europa. The legend is that the sailors returning from the New World would see these snow-covered peaks first and know that they were getting close to home.  They referred to them as Los Picos.